Last year for their first keg party I had went on first day which was Friday, and it was packed. This time it was their second day Saturday the 28th, and it was just as packed as last year! Last year they had about twenty or so sampling, and this year they advertised thirty plus.

I had every intention of giving them all a count for a grand total. But with the crowd of beer connoisseurs like me and talking with a few of them, along with the ten 2-5 oz samples I lost track. Let me say it lived up to mine and everyone else’s expectations that attended.

Let me start out at the beginning where you show your proof of age and they put a bracelet with ten pull of tabs. With this on your arm they will serve you a sample in return for one of these pull of tabs at the various station set up around the store. Now some of these were close together and moved along a little slow for me, that’s why I said it was crowded when it was all just fine.

A few of the samplings were poured from bottles and other vessels like the Double Old Thumper and XXXX IPA from Shipyard Brewing. The others I sampled if you’re counting maybe a couple short because of memory but here goes Old Burnsides Penny Weiz, Narragansett Summer Ale, Peak Organic IPA, BBC Hefeweizen, Magic hat Wacko, Peoples Pint Wheelman’s Wheat, Woodstock Inn White Mountain Raspberry Weasel Wheat, all of which were great or I would not of had them!

All in all it was a great time this year and my thanks go to Table and Vine of Westspringfield MA and I will be looking forward to next year’s party.

I almost forgot about the hotdogs and hamburgers and the brews which were all free. That could be why I do most of my shopping there! 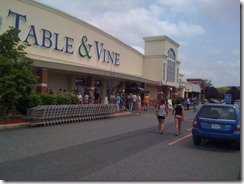